Kendal Hackney has been a fan of Sasha Morgenthaler’s beautiful dolls since she first bought one for her daughter’s second birthday in 1966 as no two dolls are alike.

Kendal’s lives in Cheshire where her bungalow is also home to an extensive collection of not only Sasha Dolls, babies, toddlers but also a VERY active bunch of Gregors, modelling their favourite Doddlydoodles jersey leisurewear! 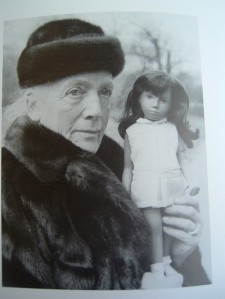 Sasha dolls were created by Sasha Morgenthaler, Swiss artist (1893- 1975). She started producing dolls in her Zurich studio then they were produced by Gotz (Germany), by Frido/Trendon (in England) and again by Gotz from 1995 till 2001.

Below: One of Kendal’s own Sasha Dolls looking through the fence at the Trendon Factory at Stockport, near Manchester, which has now been converted into apartments.

Please note: Pictures may be downloaded from this blog for your own personal enjoyment, but may not be used for any commercial purpose (including eBay) without my permission.
Thanks!